Councillor David Stevens was elected Mayor on 27 May 2020.

I have lived in Reading since 1986. I was born in Wallingford, a town then in Berkshire, some 14 miles north of Reading. I went to schools in Woodcote and Henley and then Durham University where I studied Geography. I served in the Royal Navy throughout the 1980s and left to start a civilian career in 1991. I joined a large firm of accountants and for many years travelled to London daily by train. I still work for the same firm but now have a regional role so I am based in Reading but also visit offices ranging from Cambridge to Cardiff and Southampton to Watford. I married Alison in 1992 and we have three children, a daughter born in 1996 and boy and girl twins born in 1998. All three were born in the Royal Berkshire Hospital.

I was first elected as a councillor in 2004 and have been re-elected four times. I serve as one of the three members for Thames ward.  I have sat on a number of the council’s committees including the Planning Applications Committee and Transport Management Advisory Panel. I have also been appointed to some external bodies and for five years was a trustee of Berkshire Maestros.  Since 2010 I have served as the chairman of the council’s Audit & Governance Committee.

In May 2019 I was elected as deputy mayor and during the last 12 months attended a range of events which included the awarding prizes at Reading Amateur Regatta, attending the Royal Berkshire Regiment Association’s Maiwand Day at Brock Barracks, dancing at the Nepalese New Year festivities and collecting a peppercorn on behalf of the council from the Weller Centre in Caversham.

We enter this new municipal year under the dark cloud of the Corona virus. Thankfully we now seem to be emerging from its worst effects but clearly it is going to be some time before we experience a degree of normality.  We won’t hold the normal Civic AGM in the town hall this year but we do hope to have an event when restrictions are lifted.

Away from work and council activities I spend my time in our garden, rowing on the river and cycling in the countryside around Reading. 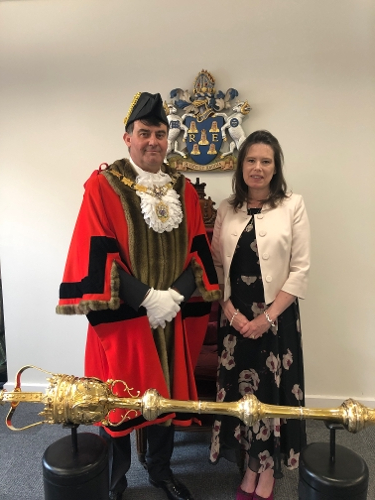 The Mayor represents the council at events, welcoming guests and visiting local organisations. He also chairs full council meetings. The Deputy Mayor (Cllr Rachel Eden) may stand in if the Mayor is not available.

Invite the Mayor to an event

The Mayor is spending his term in office supporting three charities.

Reading based charity. It offers a confidential listening to support children and young people, and those around them. It provides a free counselling service for those aged 11-25 living, working or studying in Reading and the RG postcode area.

Having a military background and knowing people still serving in the armed forces, the Mayor is keen to support these two military charities.

The friends were established to promote awareness of the Abbey’s importance, to encourage interest in and understanding of its history and architecture, and to support the preservation of the ruins. In 2021 they will commemorate the 900th anniversary of the foundation of the abbey. The Mayor of Reading is a patron of the Friends and he intends to support them in their preparations for the anniversary year.